Ropley really took much of its present form in the latter half of the 19th century, owing much to the building of the railway (1861, closed 1973, re-opened 1977) and the existence of the Hampshire Hunt. Much was also due to the Hagen family in the form of landscaping and planting trees. The school was built on its present site in 1869 and the Coffee Rooms in 1883.

In this century a major influence in the village has been the two world wars. Men from Ropley representing all three services were actively involved in both wars, and the names of the dead are commemorated on two marble tablets in the Parish Church of St Peter’s. Forty men lost their lives in the 1914-18 war and a further 19 men were killed in the 1939-45 war. 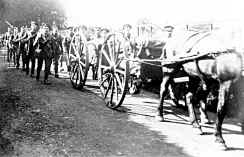 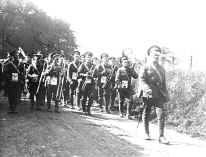 Troops marching through Ropley during the First World War

At the time of the First World War the population was about 1000. There has been a steady, but unspectacular growth since. The major differences have been in the nature of employment, with more people finding work outside the village, and a greater number of "newcomers". Standards of living have risen enormously in line with the rest of the south of England, and the house price increases of the last couple of decades have accelerated the trend of people earning their living elsewhere, and moving into the village for its attractiveness.

The village has been part of a Conservative constituency over the years, though the local Parish Council is independent and free from party politics.

St. Peter’s Church — at the heart of the village

It’s not possible of course to give an up-to date history of Ropley without mentioning the fame, or notoriety, it has gained in the late 1990’s, with the split between the incumbent vicar and some of the congregation. "Holy War in Ropley" covered the front page of one national Sunday supplement in 1999, just one of many articles in the national press on the split. Even in the days of Ropley’s renown as a source of mead in the 11th century, or of bootleg brandy in the 18th/19th century, it is unlikely that it ever reached this level of recognition. The formidable Rev. Maddock would not have been known outside this area of Hampshire, and his dispute with the locals was generic of the times, whereas the current one has created something of a precedent in the Anglican communion for lay leadership. We return to this in Part 2.