A Place I Know

We end Part 1 by including the reminiscences of one of the older residents of Ropley, Grace Strong, who lives in Town Close. It was written in October 1967, and captures the flavour of what living here was like in recent memory. 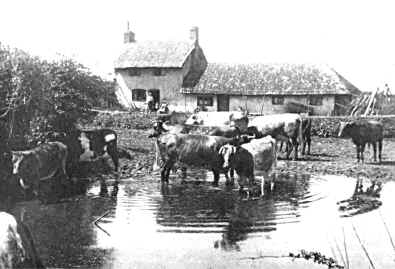 "When I first came to Ropley in 1936 my village was famous for smuggling; and for making mead for William the Conqueror; and for being the childhood home of the Archbishop who crowned Queen Victoria.

These facts used to be known by the school children as well as the old men; the latter used to tell also of the year of the deep snow, when they walked on the tops of the hedges; and of when they turned out with the "Fencibles" for Queen Victoria’s Diamond Jubilee. They were proud of the common stock of knowledge, by which they recognised that they belonged to their village and were no mere "in-comers".

The schoolmaster who retired after forty years at the Village School, which was a school for all ages of children then, used to live in a little red brick house by the cricket ground — a little quiet meek-looking man who went to church in a bowler hat and was never known to raise his voice; but when the cricket balls flew uncomfortably close to his windows he only had to come out and scan the field in silence for the big, often middle-aged men, who had been his pupils, to come and apologise and call him "sir".

The tempo of life was not fast, and fashions and news reached us late; but the young had little to compare it with, and did not show many signs of wishing to take employment far afield; they went to work on the farms which had little in the way of modern machinery, but looked prosperous.

The cottages were picturesque slums in most cases; there was no mains water in the village and the wells often went dry. In outlying lanes the slums were not even picturesque, they were corrugated iron shanties smothered in decaying vegetation, without electric light.

Today the main water runs through the village and main drainage is on its way(1). There is no house without electricity and few families without a car.

The children do not know the old stories, neither do they explore the village much, and have been heard to say with conviction "we don’t see any kids down our way". In order to remedy this state of affairs they are taught nature study in school — the country knowledge and expertise which used to be a part of life, now taught as a subject. But they are proud, and justly, of their splendid school, into which they rush joyfully each morning to see what exciting new ploys are in store for them. They go to Paris for the weekend and later cruise to Turkey or Greece; they go to Portugal and Italy for their holidays. "Where did you go?" one asked another in the bus. "Majorca". "Where’s that?" "I don’t know", said the traveller, "we flew".

After eleven of course they go to the secondary school away from the village, and their one idea when they leave school is to go right away to work — to bright lights, coffee bars, "life" away from the dark lanes, the houses far from bus and train, and "nothing to do in the evenings". In any case, their families won’t be staying long; Dad’s firm will be moving him on, for he won’t get promotion otherwise, and after four or five years or so they will all go away to some other community.

The old cottages have been bought up by business couples who have converted them charmingly. "They’re welcome", the former inhabitants (now in council houses) say: "who wants an old place where you butt your head every time you stand up? Give me a nice modern house". The neat, convenient bungalows have shot up along the roadsides with gardens that would put a public park to shame.

When I first came here, the surnames scored into the old tombstones in the churchyard were the same surnames that you often met in the little shops, on the farms, and in the four (still flourishing) pubs(2), and many of them were related to each other and could tell you many long, often libellous or ribald, stories of each other when young, in a Hampshire burr that lent colour and emphasis to their speech.

There are fewer owners of these names now, and they are growing older. The parish boundaries, the rights of way, the history of the village, are locked up in the memories of these members of the over-sixties club, and the sense of being part of a place with its own tradition and quality will die, I think, with them.

Is it a bad thing? Is it a good thing? Has it been replaced with better things like the well-educated children, the prosperity, the knowledge of the world, and perhaps the feeling of belonging to the world rather than to the village? 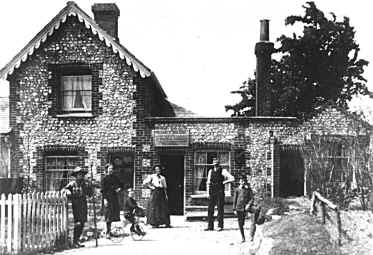 The Star in a bygone, thirstier time

(1) – mains drainage is still not available in the village.

(2) – the four pubs are now cut to two, the Anchor and Chequers. The loss of the Star is particularly grievous as it means there is no pub in the heart of the village.

Much of what Grace Strong talks about as being of central value in her experience of the village can not be recovered. To put it briefly, her generation was the last to enjoy the countryside before it was changed for ever by modern agricultural practices, chemicals, and mass transport by road and car. It was also the last before the advent of modern medicine for everyone through the NHS, better living conditions all round and the widespread use of modern conveniences like vacuum cleaners, washing machines, and widespread, accessible, education, leisure and transport. Two generations on, we live with this inheritance, and face the task of keeping the best of the old and the new, mitigating the adverse effect of the one on the other.