Despite the growth in the number of households 26 of the respondents (5.7%) are currently in need of alternative accommodation, the majority of these are the sons and daughters requiring rental accommodation.

Of the 94 children aged between 4 and 11 identified in the Questionnaire 60 were being educated at Ropley school, the balance presumably travelling out of the village to other schools.

Children 16 years of age — % of population

Residency in the village is evenly split with approximately one third of respondents having lived in Ropley for less than 5 years, with another third residing between 6 and 15 years and the final third being here more than 16 years to 50 years, with 31 residents having lived here for more than 51 years. There is no real divide between the long term residents and "incomers" of Grace Strong’s day any more, as the great majority could be called that by the old standards. It may be true that "incomers" still feel that way, but perhaps that has more to do with expectation and the pace of modern life than reality.

People of pensionable age as a percentage of population

The rural nature of the village with its wide geographical spread (one of the largest in Hampshire) and the lack of public transport is reflected by the 1200 plus roadworthy vehicles kept in the village, which averages 2 per household. The number of households without a vehicle were 34 (7.5%) with half these being persons over 75 and living in the village centre. This compares to 24% for Hampshire as a whole, confirming the dependency on the car in a rural village.

It seems that Ropley is a relatively prosperous place compared with Hampshire and more so of course within the setting of the British Isles as a whole. With a relatively high proportion of retired and well-off residents, an existing strong local community feeling, an attractive setting, it should be possible to manage the village to benefit both the residents and the environment.

Why did respondents to the questionnaire move into the village?

Many residents (34%) indicated that they had problems with surface water on the highway. A small number, 6%, continue to have problems in their house and garden. A major contributing factor is thought to be local residents who deposit grass and hedge cuttings in the ditches, and the Hampshire County Council contractors who do the same.

Nearly half of the people were in favour of more Dog Mess Bins. 29% suggested that they be located around the recreation ground, though there are two there already. There were numerous other suggestions, the most popular being around the Church. One respondent felt that provision should be made for horses as well! 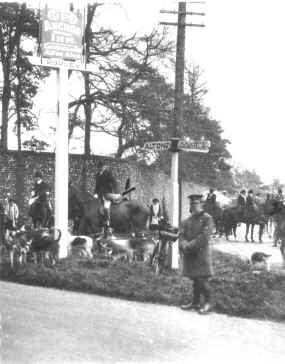